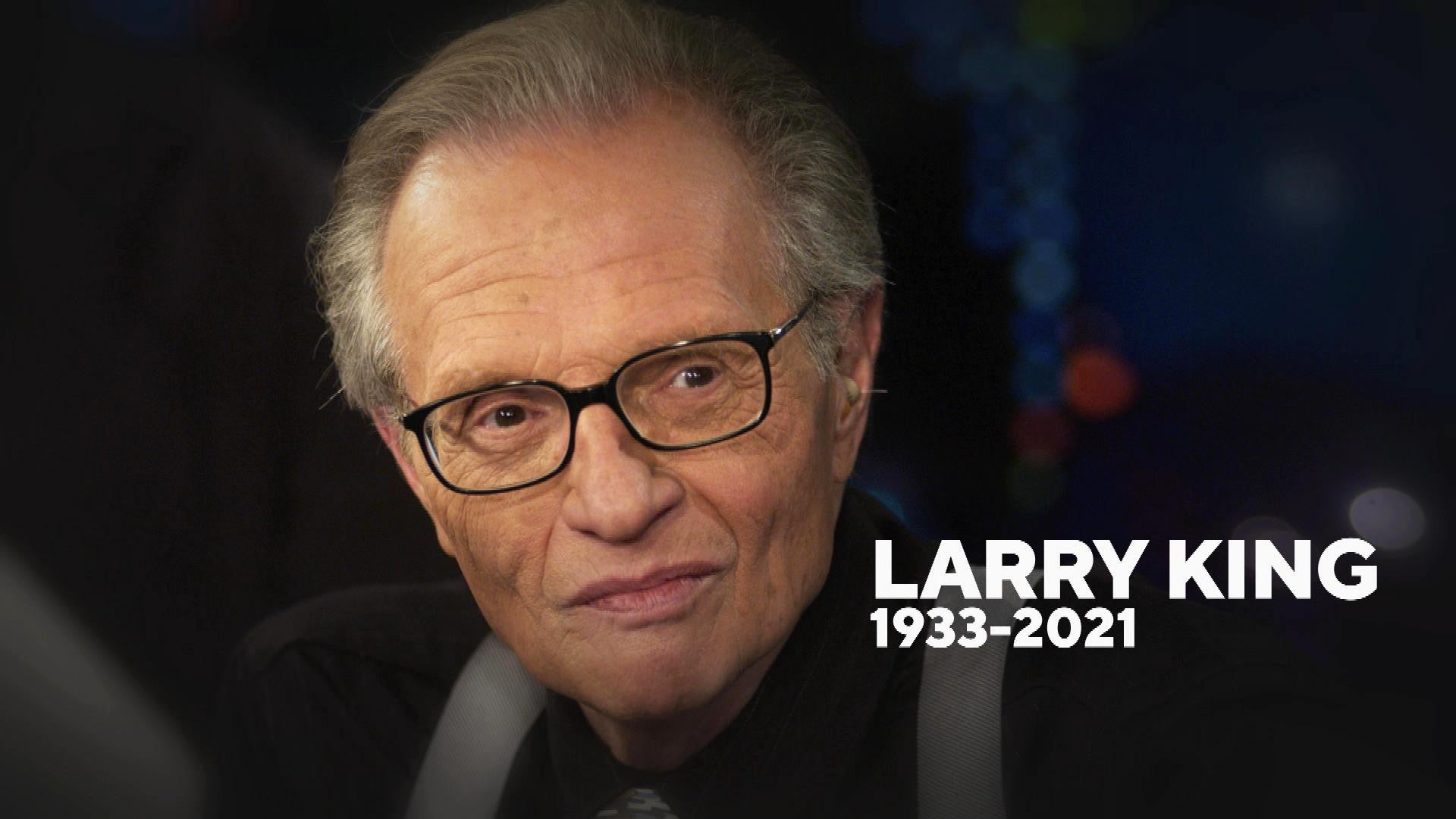 Legendary TV and radio host, Larry King, died at Cedars-Sinai Medical Center in Los Angeles on January 23rd, 2021 at age 87. Larry was hospitalized in December due to COVID-19, but he’d recently been moved from the ICU to a regular hospital room after recovering from the virus.
With a career spanning more than half a century, Larry became the most famous interviewer of his generation as the host of CNN’s Larry King Live, a follow-up to his nationwide call-in radio show, The Larry King Show, which started in 1978. Larry retired from CNN in 2010, but up until the very end, he still hosted the streaming video cast “Larry King Now” on Hulu and RT America.

With his success in the media and the fact he continued working long after most people would have retired, Larry amassed a fortune estimated to be worth some $50 million. In addition to Larry’s fame as a broadcaster, he also became equally well known for his numerous marriages. Starting at age 19, the media mogul got married a total of eight times to seven different women (one of them, he married twice).
With so many marriages, Larry also had multiple children. He was the father of five children: Chaia King, Larry King Jr., Cannon Edward King, Chance Armstrong King, and Andy King. Larry also had nine grandchildren and four great-grandchildren. With so much money, so many spouses, and so many children, it was practically guaranteed there would be some conflict over Larry’s estate following his death.

However, three factors are sure to make settling his estate especially troublesome.
First, Larry was in the middle of negotiating a divorce settlement with his seventh wife, Shawn Southwick King, 61, when he passed away. Second, in October 2019, Larry created a new handwritten will, which stipulated that $2 million of his estate should be equally divided among his five children upon his death, yet the document makes no mention of his seventh wife.
And finally, two of the five children—Andy, 65, and Chaia, 51, —named in Larry’s new will died within weeks of one another in August 2020, yet it seems Larry failed to amend his handwritten will to reflect their deaths.
Given Larry’s immense wealth and the fact that his seventh wife claims they worked with estate planning lawyers in the past, it’s likely that he had other estate planning vehicles, such as trusts, in place to protect and pass on some of his assets. But since trusts are private and their contents generally aren’t made available to the public, we don’t know the full details of Larry’s estate plan.
That said, in light of his impending divorce, the existence of the new handwritten will, and the recent death of two of Larry’s children, it’s almost certain that there will be a major court fight between Larry’s seventh wife and his surviving children over the $2 million in assets listed in the new will. In fact, Shawn has already announced that she plans to contest the handwritten will.

Till Death Do Us Part

The first factor that makes Larry’s case so contentious is his last divorce—or lack thereof. Larry filed for divorce from his seventh wife, Shawn Southwick King, in August 2019. As with most divorces, it can take some time for the two parties to reach a final settlement arrangement (especially when it’s a long marriage like the King’s, who were married for 23 years), and Shawn and Larry were apparently still negotiating their divorce settlement when he died in January 2021.
According to The Wealth Advisor,  at the time of his death, Larry was paying Shawn spousal support as part of their ongoing divorce negotiation, and she was reportedly seeking $1 million in annual spousal support as part of that deal. However, given that Larry died before the divorce was finalized, Shawn could inherit far more than that—and this is true in spite of the existence of Larry’s new will or even prior estate plans.
Given that the couple was married for more than two decades, Shawn’s ultimate inheritance will likely far exceed the $1 million per year she was seeking in the divorce settlement, which is something Larry likely would have wanted to avoid. What’s more, given that Shawn is planning to contest Larry’s new will in court, Larry’s surviving children are now facing the prospect of a costly legal battle.
This brings us to our first estate planning lesson.

Lesson #1: Update your estate plan as soon as divorce is inevitable.

Although Larry attempted to do the right thing by creating the new will, he should have taken the time to work with legal counsel to properly update his plan once he knew he was getting divorced—and ideally, before the divorce was filed.
While California is one of the few states where you can change your will before your divorce is final, in many states like Florida, once divorce papers have been filed with the court, you are not legally allowed to change your will or trust document. To this end, once you know divorce is on the horizon, you need to act immediately to amend your estate plan.
When creating a new will or trust, rethink how you want your assets divided upon your death. This most likely means naming new beneficiaries for any assets that you’d previously left to your future ex and his or her family. And because most married couples name each other as their executor and/or trustee of their estate, it’s important to name a new person to fill these roles as well.
Had Larry worked with his estate planning lawyer to draft his new will, rather than writing his own by hand, he could have created a much more robust will that not only would have stipulated exactly how he wanted his share of the marital assets divided among his children upon his death, but he also could have prevented a number of conflicts inherent with do-it-yourself planning. This brings us to our second planning lesson.

Lesson #2: Always work with an experienced estate planning lawyer when creating or updating your planning documents, especially if you have a blended family.

While it’s always a good idea to have a lawyer help you create your planning documents, this is exponentially true when you have a blended family like Larry’s. If you are in a second (or more) marriage, with children from a prior marriage, there’s an inherent risk of dispute because your children and spouse often have conflicting interests, particularly if there’s significant wealth at stake.
The risk for conflict is significantly increased if you are seeking to disinherit a family member. By creating your own will, even with the help of an online document service, you won’t be able to consider and plan ahead to avoid all the potential legal and family conflicts that could arise. For example, had Larry enlisted the help of an experienced estate planning lawyer to create his new will, he could have built in provisions that would have made it unlikely that Shawn—or anyone else—would contest his will.
It remains to be seen whether or not Shawn will be able to successfully contest the validity of Larry’s new will. However, because the new will was created in such an informal manner, her case will be a lot stronger than it would’ve been had Larry worked with lawyers to formally create a new document.

Commenting on the discovery of the new will, Shawn told Page Six, “We had a very watertight family estate plan. It still exists, and it is the legitimate will. Period. And I fully believe it will hold up, and my attorneys are going to be filing a response [to the new will], probably by the end of the day.”
While handwritten wills, also known as holographic wills, can be valid, we don’t know the full circumstances surrounding the will’s creation, but several issues stand out. First, the fact that Larry was suffering from multiple serious health conditions and was in and out of the hospital could lead the court to question whether or not Larry was of sound mind when he created the new document.
Additionally, Shawn’s claim that Larry was pressured into changing his will could raise questions as to whether or not Larry was coerced into disinheriting her by one of his children, who sought to increase his or her share of the estate. And even if Shawn isn’t successful in contesting Larry’s new will, the resulting litigation will be a lengthy, costly, and needless ordeal that will deplete Larry’s estate at the expense of all of his heirs.
Finally, had Larry consulted with an attorney when seeking to amend his plan to account for his impending divorce, he would have been advised that a will is not the ideal planning vehicle for protecting and passing on his assets to his children. Instead, Larry could have used a trust for this purpose. And while there are several types of trusts available, we would have advised Larry to create a special type of trust known as a Lifetime Asset Protection Trust.

Using a Lifetime Asset Protection Trust, Larry could have not only immediately transferred his share of the marital assets to his children upon his death or incapacity, without the need for court intervention, but he could have also ensured that those assets would transfer with airtight protection from common life events like divorce, serious illness, lawsuits, and even bankruptcy. Best of all, this asset protection would last for the lifetime of his designated beneficiaries.

Sadly, Larry chose to pass those assets to his children via a will and with no protection, which guarantees that his family will have to go to court in order to gain ownership of his share of the assets.
Next week, in part two of this series, we’ll discuss how a Lifetime Asset Protection Trust would have benefited Larry and his family, as well as the complications that are likely to arise given that two of Larry’s children died before he had the chance to update his plan.