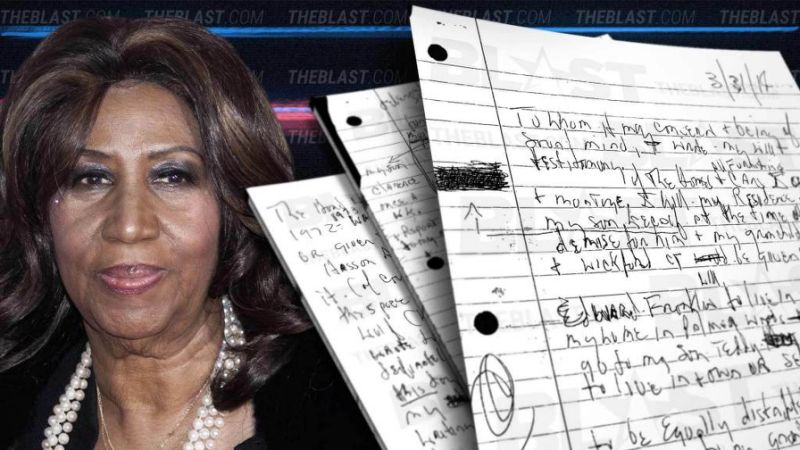 Nearly three years have passed since Aretha Franklin, known as the “Queen of Soul,” died from pancreatic cancer at age 76. At the time, her total fortune was estimated to be worth up to $80 million. Yet due to poor estate planning, the late singer’s children have yet to see a dime of their inheritance, and what they ultimately do receive will be significantly depleted by back taxes. Moreover, it’s still not clear whether or not Aretha ever had a valid will.
When she passed away in August 2018, her family thought that Aretha died without any estate plan at all. But since then, four different wills attributed to the late singer have been discovered. And ever since those documents came to light, her four adult sons—Clarence, Edward, Ted White Jr., and Kecalf—have been in court fighting one another over her assets, as well as who among them should be designated as the estate’s representative.
While a trial is set for August to establish whether any of the four documents, some of which are handwritten and barely legible, can formally stand as her will, Aretha’s story demonstrates just how destructive shoddy estate planning can be for the loved ones we leave behind.
Indeed, although her alleged wills clearly show Aretha was concerned for the well-being of her family and wanted them to share her fortune, the legendary singer’s haphazard planning has pitted brother against brother, exposed dark family secrets, and lost millions of dollars to the IRS. And perhaps worst of all, while the legendary singer was notoriously private, all of this has played out in the news headlines for the whole world to see.
Aretha’s situation is definitely tragic, and sadly, far too common among famous musicians—Prince, Jimi Hendrix, and Bob Marley all died without a will. Yet we cover her story and others like it in hopes that it will inspire you to do right by your loved ones by creating a proper estate plan.
And such planning is vital even if you have far less wealth than Aretha. In fact, planning can be even more critical for those with fewer assets. After all, given Aretha’s massive fortune, it’s likely that her heirs will still receive an inheritance, while similar mistakes would likely totally wipe out a smaller estate.
With this in mind, here we’ll discuss Aretha’s planning mistakes and how those errors have impacted both her family and fortune. From there, we’ll explain how proper planning could have prevented the entire mess from ever happening, and then we’ll outline the steps you can take to make certain that, unlike Aretha, your loved ones never have to endure such a nightmare.

Three Wills, a Sofa, and a Spiral Notebook

We first reported that Aretha died due pancreatic cancer in her Detroit home in August, 2018. At the time, it was widely believed she didn’t have a will. As a result, Michigan law stipulated her assets would be divided equally among her four adult sons, and they agreed to designate their cousin—Franklin’s niece, Sabrina Owens—as the estate’s executor.
But in May 2019, nine months after Aretha’s death, Sabrina discovered three different handwritten wills while cleaning out the late singer’s home. According to Hour Detroit magazine the three documents—two of which were dated from 2010 and found in a locked cabinet and one dated from 2014 was scribbled in a spiral notebook found under her sofa cushions—contain conflicting instructions for how the singer wanted her assets divided and whom she wanted as her executor.
The 2010 copies of Aretha’s handwritten will provide for regular allowances for all four sons and leave specific assets to each of them. Those documents also name Sabrina and her son Ted as executors. The 2014 version, however, provides for a simpler division of her assets in equal shares between her three youngest sons, and it leaves the decision as to how much money their older brother, Clarence, should receive up to his three brothers.
Clarence, Aretha’s first child, has unspecified special needs, and he is currently 66 years old and has lived in a group home near Detroit for decades. Clarence is represented by his own court-appointed attorney.
Furthermore, in her 2014 will, Aretha reportedly wrote the names of Sabrina, Ted, and Kecalf as executors, but then apparently crossed out the first two names, according to Hour Detroit Given this, when the three wills were discovered, Kecalf filed in court to be appointed as the estate’s executor.
However, Ted and the attorney for Clarence, fought against this move. In a court filing, Clarence’s attorney noted that Kecalf isn’t fit to be the executor, as he has not “displayed any ability or inclination to support himself and lacks the financial knowledge or ability to act as a fiduciary.”

In addition to causing fighting between the brothers, Aretha’s handwritten wills also disclosed a previously unknown fact about Clarence’s father. Aretha gave birth to Clarence Franklin in 1955, when she was just 12 years old. The late singer rarely discussed her personal life in public, and up until recently, Clarence’s father was reported to be a friend of Aretha’s from school, named Donald Burk.
However, one of the handwritten wills from 2010 names Clarence’s father as Edward Jordan Sr., who’s also the father of Aretha’s second son, Edward, who was born when she was 14. Little is known about Jordan, but in the will, Aretha makes it clear that he was a terrible father and should get nothing from her estate.
On page six of the purported document, Aretha wrote, “His father, Edward Jordan Sr., should never receive or handle any money or property belonging to Clarence or that Clarence receives, as he has never made any contribution to his welfare, future, or past.” In both instances, the word “never” was underlined.
The resulting court battle between the brothers also led Sabrina to quit as executor. In January 2020, Sabrina filed her resignation with the court, noting that the family feud “is not what [Aretha] would have wanted for us.” With Sabrina gone, in March 2020, Oakland County Probate Court Judge Jennifer Callaghan appointed Reginald Turner, a Detroit attorney and longtime friend of Aretha’s, as temporary personal representative for the estate.
The judge also scheduled a hearing for June 2020 to determine whether any of the three handwritten wills can be deemed valid. Under Michigan law, a handwritten, or holographic, will can be valid as long as it meets three primary requirements: it must be dated, signed, and written by the decedent.

A Fourth Will Appears

Although the judge set a trial to determine the validity of the three wills for the summer of 2020, the ensuing pandemic caused that trial to be delayed—and in the interim, yet another will was uncovered.
According to the New York Times, the latest version of her will, which was filed in probate court in March 2021 by lawyers for Clarence and Ted, including a typed, eight-page document, titled “The Will of Aretha Franklin,” along with another 23 pages that reportedly lay out the terms of a trust for Clarence. The documents are stamped as “draft” and unsigned.
The latest will was reportedly created by Aretha with the law firm Dickinson Wright in 2018, which would make it the most recent. According to the court filing, Aretha hired Detroit lawyer Henry Grix to assist her with estate planning, and the filing includes correspondence between Grix and Aretha discussing her estate plan that’s dated back to 2017.
As for the division of her assets, the draft of the fourth will would create a trust to benefit Clarence, and it would split her remaining assets equally between her three other sons and leave specific assets to her other relatives. The will also stipulates that the three youngest sons should serve as the estate’s representatives, and as such, they would have the authority to make determinations about the late singer’s music rights, name, and likeness.
According to the lawyers for Clarence and Ted, the documents show that Aretha hired Grix and had been in discussions with him for more than two years about her estate plan, and the documents contained her initials. However, the late singer became too ill “to finish discussions on a few items” and was unable to sign the papers.
It remains unclear exactly how the documents were obtained and why it took so long for them to come to light. While the court filing noted that the documents were discovered “late in 2019,” the lawyer for Clarence told the New York Times that the date was a mistake and that he actually received the document in December 2020 in a response to a subpoena.
Although the fourth will was not signed by Aretha, in his petition, Ted asks the court to recognize the draft of the will and its accompanying notes as Aretha’s final wishes. His petition cites a Michigan law that allows a deceased person’s “intent to be recognized even if the documents are defective in execution.”
In light of the new will, the judge scheduled a trial for August 2021 to determine whether any of the documents that have been found can be deemed a valid will and therefore govern the Queen of Soul’s estate.

An Incomplete and Inadequate Plan

Based on all of the different versions of her will, it’s clear that Aretha cared deeply about her four sons and other family members, and she wanted her loved ones to benefit from her wealth and other assets. However, given that her first few attempts at planning were done on her own, by hand, and then seemingly lost or forgotten about, she didn’t take the job as seriously as she should have—at least in the beginning.
Additionally, while the discovery of the fourth will suggests that Aretha did get serious about creating a more formal plan in her final years, it’s puzzling why that version of her will and its corresponding instructions to create a trust for her oldest son, Clarence, didn’t surface earlier. Indeed, if the New York Times report is accurate, those documents were only uncovered in response to a subpoena, and even then, they were incomplete, unsigned, and in our opinion, far from adequate for an estate that large and complex.
What’s more, even if Aretha’s fourth will is ruled valid, her estate is still on the hook for millions in back taxes. According to the Detroit Free Press, when she died in 2018, the IRS claimed the singer’s estate owed more than $7.8 million in unpaid income taxes, interest, and penalties. While the sons have reportedly worked out a tentative deal with the IRS that will finally give them access to small cash payments from their mother’s estate, the terms of the deal must still be approved by Judge Callaghan.
Adding that huge tax liability on top of all the other troubles that have plagued her loved ones since the day she died, it becomes all too clear that Aretha could have done a much better job at estate planning. As we’ll see next week, with the proper planning, the legendary singer’s loved ones would have had immediate access to her assets upon her death, avoiding the need for court involvement altogether and kept the contents and terms of her estate totally private.
What’s more, a truly effective plan also would have provided a lifetime’s worth of support for her eldest son Clarence, who has special needs and will likely need financial support for the rest of his life. Most importantly, it would have done so without disqualifying Clarence for vital governmental support, which is essential for those with special needs. If you have a loved one with special needs, contact us, to learn more about the unique strategies involved with estate planning for those with special needs.
Next week, we’ll discuss how Aretha’s poor planning created an enormous tax bill for her loved ones, and how the late singer could have avoided that liability, along with all of the other problems her heirs are currently facing, using proactive estate planning.